John’s timing for a Stumberg ram hunt was great as he arrived at the same time as the first strong cold front of the season. The coolness made a roaring fire in the grand main lodge fireplace a welcome and comforting treat. In addition, the cool weather stimulated the herd of Stumberg rams in the front pasture to be more active and visible than they had been all year. There was excitement and great anticipation of the hunt when Mitchell and John started out on their adventure.
In an unusual turn of events, the ram herd was seen within 15 mintues of starting the search. That is where the real fun began. The herd was in an opening that did not present any reasonable opportunities for being approached without the hunters being sighted before arriving in realistic rifle range. So the stalk began!
John and Mitchell retreated to gain the cover of a large hill to move closer unseen from downwind. After following a circuitous route, the two men arrived at a spot where they assumed the sheep could be viewed. However, the herd had moved and only a slow approach with constant awareness of the landscape kept the hunters from being exposed to the now repositioned rams. With the new position of the rams known, the hunters used the interspersed oak motts as cover to approach within rifle range. This slow, step-by-step process to cover 200 plus yards took what seemed to be hours. Moving only when all nine sets of eyes were not looking in their direction made thoughtful planning of each step critical. Creeping, crawling, stooping, freezing-in-place and many other un-named positions allowed the hunter and guide to arrive within 250 yards of the sheep. The sheep were now on the other side of a brush-covered draw. With bi-pod shooting sticks, John prepared to shoot from a standing position. However, with the wind and distance as destabilizing factors, John finally took an uncomfortable seat on the rock strewn ground. Holding the shooting position as John waited through the various turns, movements and small adjustments that a grazing animal makes was nerve-racking to say the least…and tiring. But John’s perserverance was rewarded by the ram turning to a good shooting angle. The shot rang out and all nine of the rams ran and disappeared momentarily. As the sheep herd re-appeared on the visible side of a long away oak motte, only eight sheep were seen and they were looking back viewing what the hunters hoped would be a fallen sheep.
After waiting for the eight visible rams to wander away from the area, Mitchell and John moved closer to begin the search. The magnificent ram was lying still in a hidden spot under an oak tree. John’s smile captures the moment of feeling gained with the satisfaction of a skillful stalk and an accurate shot on an awesome Stumberg ram.
Please join us in celebrating John’s perseverance and the energy that was this great hunt. As with every hunt, we know that this experience is unique from any that has taken place here on the Patio Ranch; no two hunts or experiences are ever the same. All aspects from the emotions felt to the weather and animal behavior guarantee those unique traits. And for John, he too can now “…tell a different hunting story!!”
Congratulations to John and blessings for a fun and fruitful 2013 hunting season to all of our friends!! 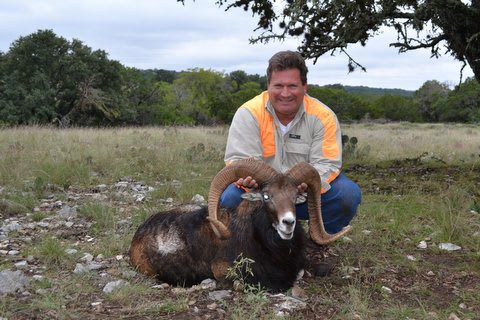