Most of the signs indicated that the axis bulls should be moving and relatively easy to locate; the weather was cooler, a rain front was moving into the area, binoculars were clean and the animals had not been hunted for a couple of weeks. Also, Jessie had just put a 7mm shot at the rifle range in the dead center of the red target “bull’s eye”! Everything was in place and in our favor…or was it?!
The first indication that “…relatively easy to locate…” was an erroneous assumption was that we saw very few axis deer. The second indication of the flawed reasoning was the pure European mouflon sheep trophy rams acted as we had planned the for the axis to act…they were relatively calm and undisturbed by our pasture excursions. As a matter of fact, we were able to observe seven (7) large 29”-33” rams as well as many ewes and lambs (Those of you that are familiar with the mouflon sheep know that this is unusual behavior). In addition, although not unusual, we had not expected that so many of the large axis bulls would have already dropped their antlers and that so many of the remaining bulls would suffer shortened tines or beams from the rutting activity this year. We passed the first afternoon enjoying the animals that we did view and not too anxious that things were not proceeding as “planned”. Things started to look better late that afternoon as we witnessed a tremendous fight between two large axis bulls right as dark started to fall; but, their constant movement and the poor light did not allow a safe shot. The evening meal was lively and we enjoyed learning about the Patio Ranch’s newest friends.
The next morning dawned with the possibility of more of the blessed rain that we had received the first evening…about 0.3”. The rain did not fall that day and the axis deer behavior did not change. We did see a few more animals, but they were usually moving away or too far for us to approach. At lunch, we contemplated new ways to find those big bulls that we knew were still in the pasture somewhere. As the sun approached the western horizon that evening, we were still hopeful of a change for the better. And then it happened…the flash of white antlers in the late afternoon sun alerted the hunters to a fairly large bull; but we were unsure of just how large. Jessie moved to a better position and the axis bull’s antlered head was visible against a backdrop of juniper…great caudal tines on heavy main beams. The decision was made in a heartbeat and Jessie’s shot was placed on the deer as well as it had been placed on the target the day before!
A wonderful meal prepared by Teresa was enjoyed by all later that evening. That was followed by a celebration of the hunt, stories of times passed and dreams of things to come. Please join me in congratulating Jessie on his beautiful axis bull and on a great hunt. As Jessie returns home with his axis trophy bull, I hope that he will relive the events of these last two days for the rest of his life: the beauty of the Texas Hill Country, the thrill of the hunt, the delicious axis venison from his deer and the wonderful hunting heritage that he inherited from those before him. I know that he, like others that have hunted on the Patio Ranch, can now truly “…tell a different hunting story!”
May you continue to receive more rain to renew the parched earth! 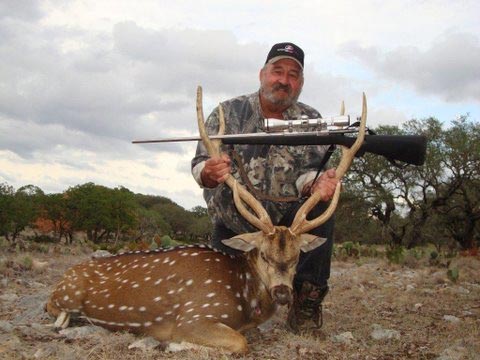