Through the years, many hunters have shared hunts with us here on the Patio Ranch. Of those many individuals, a few seem to have a knack for being in the right place at the right time to spot or be in position to get a good shot at their quarry. Woody is one of those individuals. However, to Woody on that morning of his markhor hunt, it probably seemed that this was not one of the gifts that he had been blessed to possess.
The day started with Woody and his guide not certain that the large markhor they was seeking was still in the pasture. Each draw that was searched and each cedar brake that was traversed seemed to be holding the location of the markhor secret. By midday, the whole pasture had been viewed by someone in the hunting party. The only possible explanations were that the markhor was moving ahead of the hunters or that this very intelligent ten year-old wild goat of Afghanistan was hiding in, under or around some tree or brush pile to evade discovery.
This motivated the searchers to re-double their efforts. Every tall grass clump, every brush pile and every downed tree were closely scrutinized. The darkest shadows in the deep cedar brakes and draws were carefully searched with binoculars to hopefully reveal a shadow that moved or a color that looked out of place. The large, 10 year-old markhor male was proving that he survived this long due to his caution and stealth.
On a quiet stalk down a draw full of oak trees with the red leaves of fall, a brown, long-haired animal was seen just for a split second. Was it the markhor? Woody set-up behind a large oak tree with a branch just the right height to help steady a rifle and possibly prepare for a shot. Then it was spotted: the old markhor making his way through a cedar brake over 150 yards away and weaving through the trees and brush heading away from Woody’s hiding spot. The markhor was too far and behind too many obstacles to get a shot. At this point, even Woody was probably doubtful that he had that knack for being in the right place. But, his luck was about to turn.
A truck starting in the distance seemed to stop the old markhor. He listened and decided to return along the route that he had just traversed. He was coming closer, but still casually weaving in and out of the many oaks in the bottom of this ravine. All of the sudden, the markhor turned and started down the bottom of the draw straight toward Woody’s position. The oaks were affording great cover for both the hunter and the hunted. After disappearing for what seemed like an eternity of less than a minute, the markhor appeared less than 50 yards from Woody and walking straight toward him!! After some careful adjustments to his position and a quick aim, Woody’s rifle shot rang out. The magnificent markhor lay still!
Woody spent some special time admiring this magnificent animal and marveling at the great condition of this great old warrior. His chipped horns and scarred skin attested to his dominance in the herd. His nose was scarred from the many encounters with other males, but his hair coat was long and full showing one of the traits of a fully mature male. All that were present marveled at this special creature. We ask you to join us in sending congratulations to Woody on the closing of this part of his hunt.
We invite you, too, to join us for some hunting experiences that will give you the opportunity to tell some amazing true stories around the campfire with your friends. The remembrances of these times will hopefully stay with Woody the rest of his life for many story times with friends, family and fellow hunters. Now the time comes when he can truly share his memories and “…tell a different hunting story!”

Best wishes for a joyful, healthy and prosperous New Year! 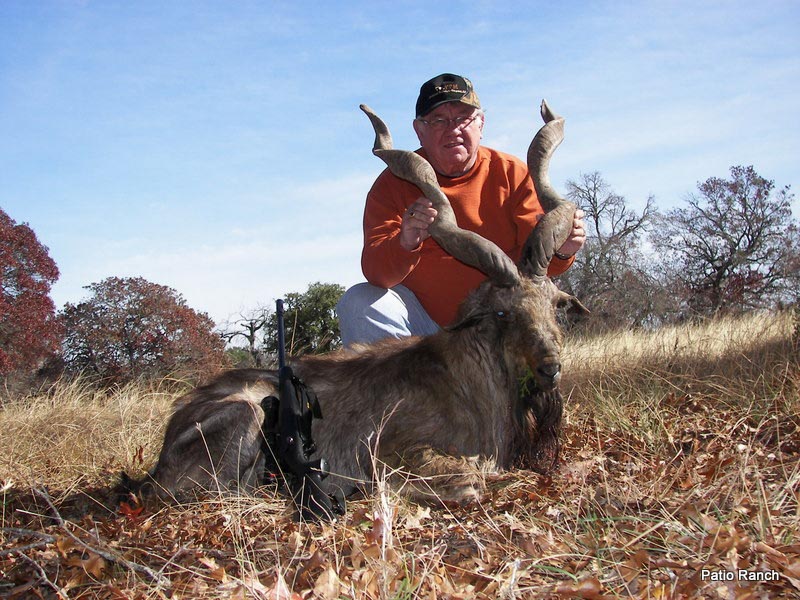