Stalks for Her Memories!

There are a generous and caring group of people in the hunting world that are always looking to benefit good causes. Larry and Colette are such people and the “Cattle Baron’s Ball” is just such a cause in that they are raising funds to eliminate cancer. Larry and Colette were winning bidders on a Manchurian Sika hunt set for the The Patio Ranch. In addition to making two new friends, sharing the experience of their hunt was a true blessing for all of us involved.

After getting to know each other and checking the rifle sights at the range, the hunt started with a search for the pure Manchurian Sika on the Patio Ranch. As many of you are aware, sika are aggressive fighters during the rut and finding a bull with his set of antlers intact after the rut and in January is a rare occurrence. This year, a couple of the larger bulls actually arrived in January with little or no antler damage. This was the first indicator that pointed to a high probability of success. The second indicator was that Colette proved to be an excellent marksman at the rifle range. The third indicator was that after Colette and her guide, Wes, started walking the pasture in search of the large bull, Colette proved to be adept at stalking. After walking a few hours and covering the whole pasture a couple of times, nary a sika was seen. With the light failing, hopes of finding the right sika that day were falling also. As the final hill was topped, success glimmered brightly again as one of the only two sika in the entire pasture with good antlers was seen. Wasting no time and racing the setting sun, Colette and Wes worked to a spot for a shot. A single well-placed shot brought this stalk to an end. A “last bite” was given and pictures were taken as the hunting party gave thanks for this beautiful trophy. After a great meal and stories told in front of a comforting fire, all headed off to bed to prepare for the next day’s adventure.

The next day, Colette decided to hunt an aoudad. In the section size pasture that the aoudad call home, there are wide expanses of native tall grass interspersed with oak mottes and cedar brakes for cover. These conditions are conducive to aoudad survivability while increasing the challenge to the hunters. After entering the pasture, the hunting party glassed the wide expanse from a high hill. A herd of 7-8 large rams and some ewes with lambs was spotted a few hundred yards away and moving slowly in the opposite direction from our position. Wes and Colette decided to start the stalk at that point. Over an hour later we could see the hunters from the vantage point we had taken in the next pasture. They had crossed a low valley and then carefully picked through a dense cedar brake to come to the base of a hill where the aoudad herd had grazed their way to the top. The hunters could not see the herd at this time, but knew that they were probably still on the top of the hill above them. This gave the hunters a chance to approach the herd unseen by using the hill and the tall grass as cover. Slowly they crawled through the tall grass moving quietly but steadily to close the distance and gain access to a spot where they could actually have visual contact. As they approached the top of the hill, we could see Colette set her shooting sticks and assume the firing position. But, we watched for over 10 minutes as the hunters were unmoving, awaiting the large rams to separate from the herd. Finally after what seemed like ages, a shot rang out. Although we could not hear them speak, the unmistakable behavior of success was evident as Wes congratulated Colette on her fine stalk, patience and great shooting.

These two great hunts were not just about the animals taken, but about the whole experience of the hunt: great food and great stories shared, beautiful animals seen, new friendships started, and sharing the bounty of God’s beautiful creation. We would like to thank Larry and Colette for their generosity to the Cattle Baron’s Ball as well as for sharing their hunt experience here on the Patio Ranch.

Please join us in congratulating Colette on these two fine trophies as well as her hunting skills and joyful spirit. We hope that you are able to meet Colette some day and listen close as now she can truly “…tell a different hunting story!”

Many blessings to you! 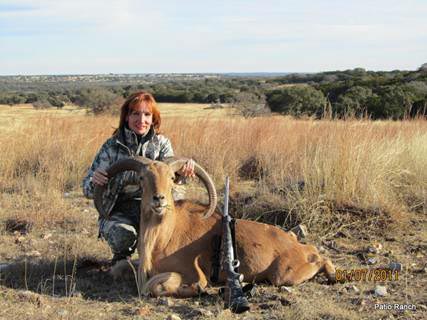 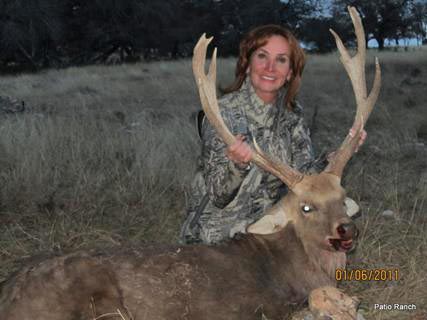