Due to ranches like the Patio Ranch working with the US Fish & Wildlife Service, Endangered species such as the barasingha are now numerous in the United States and surplus males from managed herds are available for hunting. A percentage of the proceeds from these hunts are donated to programs that directly benefit the native ecosystems of these endangered
animals with the hope of building their numbers in the countries of their origin.

Jim was searching for a bull that exhibited extra points and kickers…a bull well above average. All of the barasingha bulls were not just in good shape…they were rolling fat! The unusually wet year allowed our barasingha to put on great stores of fat before going into the rut. After adjusting for the tremendous body sizes, we were able to focus on a number of really good bulls.

Jim’s patience was rewarded; about mid-afternoon on the second day, we saw the one bull that fit the description. But, at that very moment, a severe squall line came through sporting some heavy rain. The bull did not know that we were around, but the whipping tree limbs and strong wind gusts had him really nervous. He was jumping and turning at every gust as the noise of twisting and cracking limbs were spooking him. Just as he was turning to bolt for deeper cover, this big non-typical bull stopped to observe the limbs of the whipping tree in front of him. The split second that he stood still, tense with caution, allowed Jim one shot. He did not need another! His magnificent bull will easily place in the SCI top 10 all time entries for barasingha!
We invite you to come be part of the many programs on the Patio Ranch, including the endangered species success stories. Give us a call and let us tell you about the Patio Ranch. Like Jim and his barasingha hunt success, we would like to have you be able to “…tell a different hunting story!” 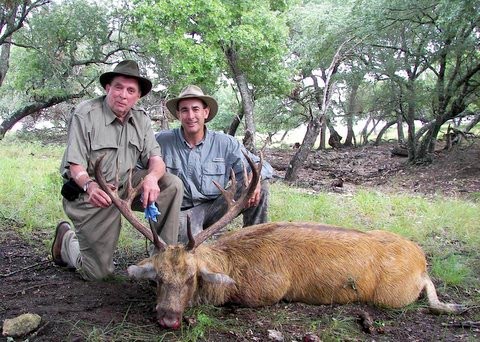