Jim had hunted on the Patio Ranch previously and had taken some unique and really large trophy animals. That experience revealed some interesting facts about this gentleman: he is very focused on the animals that he hunts, he shoots very well, he is very persistent in pursuit of his quarry and most of all he enjoys and cherishes his hunting heritage.
This time Jim was back to look for an Axis Deer that had been spotted earlier in the year. This unusual bull had been seen a number of times while in velvet with what looked to be eleven (11) points: the normal complement of a typical 3×3 axis bull plus five non-typical points. That was an animal that really appealed to Jim.
Jim had brought along Butch to help him on this hunt. After hearing about the habits and patterns of movement for the axis deer herd in the pasture, they had decided the best chance would be in setting a ground blind in a spot that would hopefully enable the hunters to view the travelling deer as they crossed an often traversed clearing in the pasture. Also, the hunt time coincided with an animal activity period forecast for that day. The waiting game began, but was not prolonged; all of the pieces of the hunting puzzle seemed to fall into place. A herd of axis came into view very soon and the non-typical bull was in the group. As the herd of axis travelled across the opening, the deer changed positions often in the group making a clear shot a difficult task. But the patience and persistence that Jim had displayed on his last trip came into play again on this hunt. After some tense moments, a shot resounded through the hills…the large bull fell to the ground and was still!
There are many similar opportunities for a great axis deer here on the Patio Ranch awaiting anyone with that desire to hunt. A number of other non-typical axis bulls as well as some really large typical bulls are being seen regularly now as the axis rut is under way in the Hill Country. That also means there is a good chance to witness an exciting confrontation between two of these “chital” bulls as they are often seen locked in dominance matches at this time of year. So, think about booking hunts before the summer comes to an end if these magnificent spotted deer are on your list of adventures to experience this year.
We invite you to call us or drop an email to ask about open dates for a great axis hunt. You too, like Jim, can build your own hunt and your own unique tale for everyone to share as you “…tell a different hunting story!”
May you be blessed with timely rains! 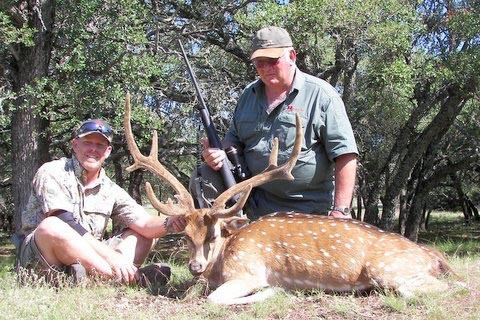