Carter arrived on the Friday afternoon not really knowing what to expect in regard to Manchurian Sika on The Patio Ranch. He did mention that prior to his arrival he had looked on the internet at different sika deer and said that he had not seen any to compare to those on the Patio Ranch website. At the time, he had little knowledge of the sika deer; but was on his way to becoming an expert on appearance and behavior of a true Manchurian Sika by the end of the weekend.
There were between six and 10 large, mature trophy sika bulls available in the hunting pasture. Carter spent most of the first morning looking at different sika to get a feel for what he could expect and learning the hunting area. After that, the hunt really began in earnest. Carter and Wes (the guide) had tentatively selected a bull that they wanted to pursue in their earlier observations.
After locating the large bull again, a stalk was started to get within rifle range. That attempt ended when another sika bull spotted the hunters and called out an alarm. This same scenario was re-enacted a couple of more times with the same result – “busted” before they were in range. Finally, a persistent nature and luck paid dividends. Carter was able to stalk within range and take a shot. The rest of the story is told in the pictures. Please join us in sending out congratulations to Carter on his fine trophy pure Manchurian Sika bull!
We invite you to come visit the ranch and see these superb, large sika up close…they are amazing animals. We would be honored to share a hunt with you for a sika or barasingha or Arabian Oryx or any of the other trophy animals on The Patio Ranch…contact us and we will tell you all about the hunting opportunities. Whatever may be your choice, we can help find a hunting experience here on The Patio Ranch where you can truly “…tell a different hunting story!” 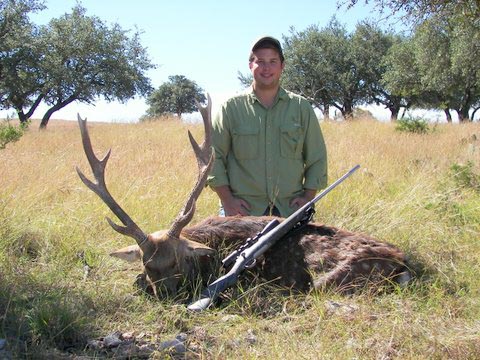