It never ceases to amaze me the excitement that a six year-old can find in the most simple things…piles of rocks, cactus plants (that make targets for those piles of rocks), seed heads of thistle, a dried cast antlers, red-ant beds, etc. Trey did discover and experience all of those things and more during this trip. However, the look of amazement in the eyes of one special six-year old when his father stalked and shot a tremendous animal (as his father Bob did this morning) made all of the other earlier wonders pale in comparison.
The small party had a short window of time in which to hunt; but a trip to the Texas Hill Country for the opportunity to hunt a rare pure Manchurian Sika on one of very few ranches that have a true pure herd and is well known for the tremendous quality of the bulls would prove well worth the drive. The hunting party had celebrated their arrival with an early meal that afternoon and were able to hunt until dark. No large sika were seen on the first evening, but all knew that finding one was just a matter of persistence in the search. Tomorrow would be another wonderful day to hunt. Until then, the historic lodge was explored and enjoyed by all that evening. Although the excitement of two young boys filled the lodge, the hunters were finally able to find peaceful slumber to prepare for the next day.
The day dawned bright and full of promise for a successful hunt. Bob, Trey and Daniel (the guide) started the search early and were rewarded by spotting a very large sika loafing under a shade tree and at ease. The stalk began. However, no matter how careful of a stalk is made, wild animals still have an innate alertness to make an approach by hunters difficult. The large, old sika bull was acting more and more nervous as the hunters stealthily approached, preparing to leave the area at any second. Finally, a shot presented itself to Bob. He had to make a decision: shoot now at a great distance or lose sight of the large bull and start the search again. After a short, silent conference with Daniel, Bob took careful aim and squeezed the trigger. The celebration began by honoring this amazing animal and giving thanks for this wonderful hunting opportunity. Trey related to all the step by step story of the hunt with great pride and unbridled excitement. As one can glean from the picture, Trey shared in his father’s success and joy!
Please join us in congratulation Bob on his successful hunt and on his continuing introduction of Trey to his great hunting heritage and the building of wonderful times spent together. How great to know that Trey will have great memories to pass on to his children of the times that he and his father spent in the pasture enjoying the simplest yet most important of things: rocks, cactus, Manchurian Sika and the thrill of the hunt! Listen carefully around the campfires in the future as we may be fortunate enough to hear Trey’s memories of this hunt as he will surely ”…tell a different hunting story!!”
May your deer season be blessed with great memories shared with those special to you! 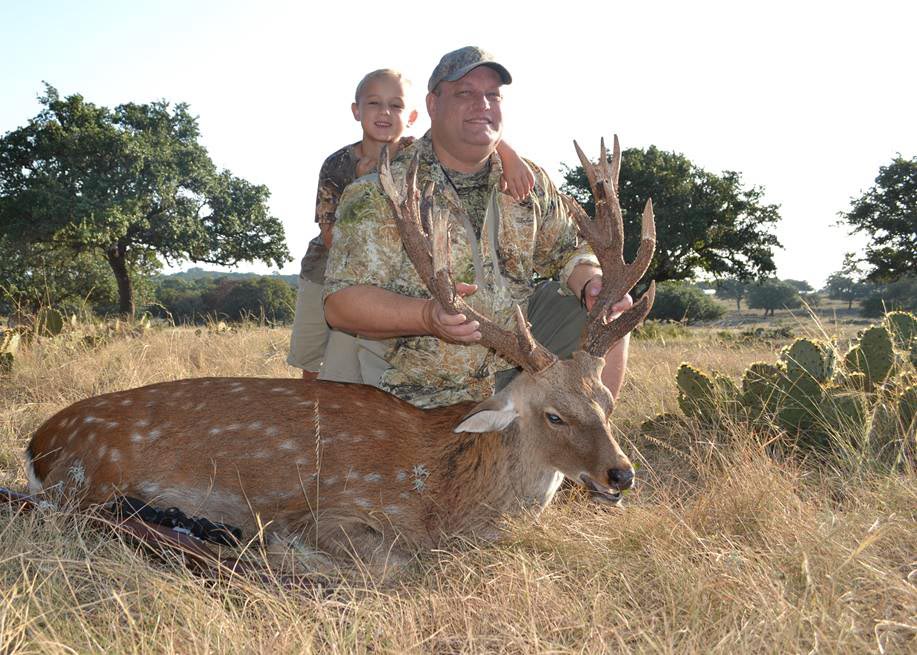