David and David, Jr. started their management hunting stories on the Patio Ranch last year with a successful axis management hunt. Young David took a great axis management buck as well as an axis doe. The time spent together with his son was an experience that was special to them both…a father passing on the great hunting heritage to his son. And as part of that heritage and an added bonus to the hunt, their freezer was filled with great tasting and healthy venison that would remind them of the fun time spent together all year as the meat was enjoyed.
This year, as with last, the day started early as they traveled from Austin and arrived at the Patio Ranch at first light. Some time was spent at the rifle range checking sights. After a few shots and some adjustments, young David was ready to start the hunt again. Unlike last year when the weather at this time was in the 40’s and animal movement was great, this day’s temperatures ran into the 90’s with sparse animal movement. As uncomfortable as the day seemed, all was forgotten as Ray spotted a couple of axis doe as we were passing from one pasture to another. The deer seemed relaxed and comfortable in the shade of the cedar trees, which allowed David to slowly prepare for the shot. David took aim and fired; the doe jumped and ran away. By her behavior, it was obvious that she was hit. After a short waiting period, the search began. Again, Ray’s sharp eyes and bulldog instinct to not give up paid dividends…he spotted the downed doe. The celebration began as pictures were taken and congratulations given.
After a trip to town for lunch and to drop off the axis doe for processing, a short “siesta” break was had by all to wait out the hot part of the day. When the hunt started again, the deer seemed to have disappeared. Over an hour passed with no deer spotted. Finally, a herd was seen grazing over the top of a hill. We pursued on foot, only to have the herd disappear by the time we had reached the other side of the hill. But, that is part of the hunt; not every stalk ends in with a shot. Another lull in activity followed. Finally, a doe with her yearling following was spotted heading over the top of a hill. David was just about in the right position to make a shot. Finally, the doe stopped with daylight fading. Again the crack of a rifle followed by the sound of the bullet striking the target signaled another successful shot. The smiles in the picture again show that there is something special about the father/son relationship that shares this special time spent hunting.
Please join us here at the Patio Ranch in congratulating David and his father for taking this time to spend together sharing this wonderful hunting heritage. The success of this hunt is shown not only in the bountiful harvest, but also in the bonding that the father and son team develop and the memories that they create to share again in the future. They will share this time over and over again when they partake of the venison bounty with family and friends.
I invite you to call and see if we can help you to set up a special hunt for you or your family here on The Patio Ranch. Then, as David and his father attest, you can then recall that special and unique hunting memory and truly “…tell a different hunting story!”
Blessings and wishes for timely spring rains! 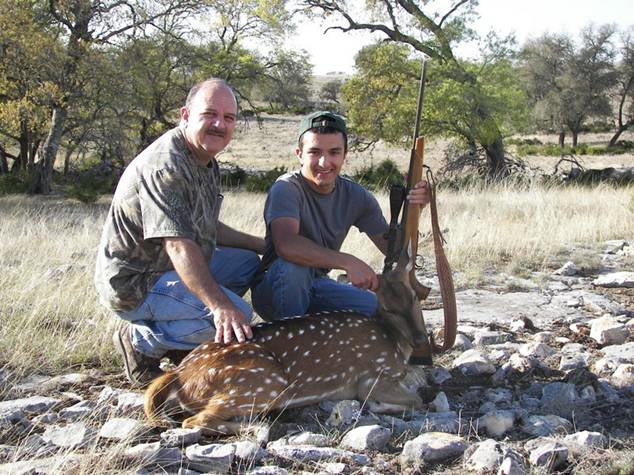 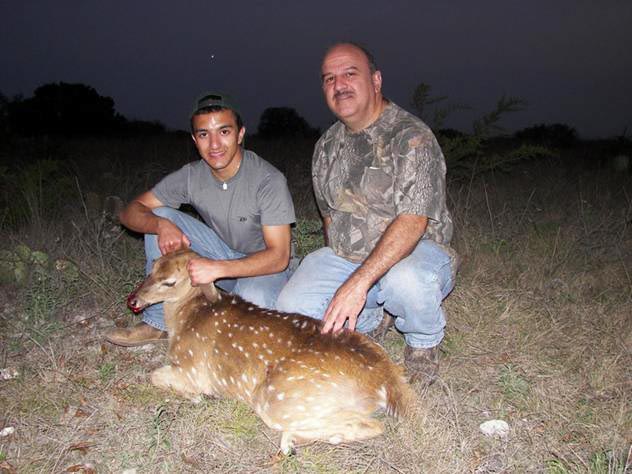