Steve had been wanting to take a really large axis for a couple of years. When he received a photo of some tremendous deer currently on the Patio Ranch, he quickly decided that this was the year and made reservations. There were a number of 32″+ deer in the picture; but one really looked like “the deer” that he had dreamed about and would look beautiful on the wall above his fireplace. Steve’s daughter Erin has also developed a love for hunting and had some free time to accompany him. Steve and daughter Erin are like “peas & carrots”: both are loyal Aggies, both love to hunt and Steve is a pharmacist while Erin is studying to be a pharmacist. So, when Steve decided that he was going to hunt axis deer, Erin was not to be left out of the adventure.
From the beginning, Erin proved to be an asset to the hunt…she had very sharp eyes and an exuberance that was contagious and kept us all alert. But even with Erin’s game spotting prowess, the hunt came down to a ground blind under a spreading juniper tree. On the last day of the hunt, the camouflage shrouded ground blind still seemed to be our best chance. Sitting through the heat of the summer day seemed to put everyone on edge thinking that nothing will come out in this heat. But, no sooner than that thought was crossing our minds, a couple of axis bucks came onto the scene. Finally, the large one from the picture made an appearance. Waiting for a clean shot opportunity drew out the waiting game for what seemed like ages. But finally the conditions were right.
Steve shot and then had a dazed look on his face that seemed to say “Is this real!?” The adrenalin of the moment and the long waiting seemed to put him in another world. But the shouts of excitement from Erin brought him back to the moment as she brought the reality to Steve that …”You have him!!!”
The pictures cannot tell the whole tale of the hunt, but this moment will live on in their collective minds for the rest of their lives as a memory of time spent together and when the big one did not get away. We invite you to come join us for a little adrenaline pumping activity on the Patio Ranch. Come hunt with us and let us help you experience the opportunity for you too to “…tell a different hunting story!”
Best wishes! 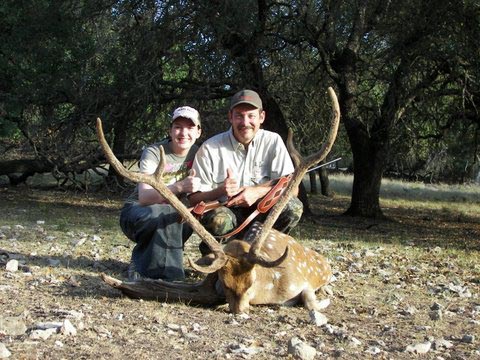