The thermometer on the porch (where the air felt warmer) said 34 degrees but the ice on the shooting bench indicated a different temperature. After a couple of shots and an adjustment on the rifle scope, it was off to the pasture to hunt a very large Stumberg Sheep ram. Parker had arrived at the ranch with his grandfather last night. Sitting in front of the warm fire in the great room and watching the Giants battle the Broncos was a world away from the weather this morning. But the feel of the cold and wet and ice did not dampen the enthusiasm of this young hunter.
Upon arriving in the pasture with the wind blowing strong and the rain/sleet falling, most animals were out of sight; probably in the draws filled with cedar that broke the wind and helped the animals to mitigate the extreme conditions. Mark and Parker were glad that they had brought along rain gear. After locating parts of the herd, a bachelor group of rams was spotted. With a fleeting glance, Mitchell was able to determine that the big ram was in the group.
For the next 1-2 hours, the sheep played cat-and-mouse with the hunters. The consensus was to set up where the sheep would probably walk into view. When that happened, the normal problem of the sheep bunching together (due to their herd instinct) would not allow a clean good shot to be taken. Parker waited patiently enduring the constant song of “he is on the left; no, he is the second from the left, now he is behind the 4th ram….” Anyone that has hunted sheep as they graze at a distance knows the routine. Finally, Mitchell said the words “he is clear”. Before they could count to two, Parker had fired and the magnificent ram ran full speed out of sight. The hunters were pretty sure that the ram was hit hard. Upon walking toward where he was last seen, the sight of the large ram lying still allowed the hunters to breathe again in relief.
Please join us here in congratulating Parker on this tremendous ram. The cold rain and ice did not seem to negatively affect this young man and his patience and perseverance are commendable. His positive attitude and the support of his grandfather were wonderful to experience. Now, with this young hunting career starting, he can truly start what we hope will be the first of many opportunities to truly “…tell a different hunting story!!”
May your Thanksgiving holidays be blessed by our creator with family, friends and many new wonderful memories of your own! 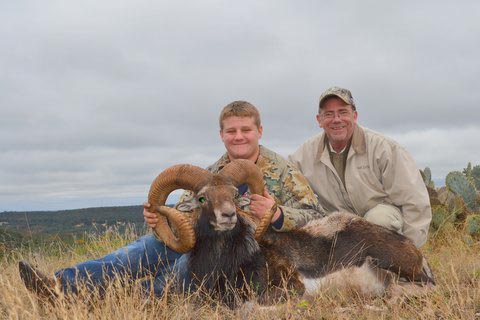