Lance and Emily had spent most of the day in the section-sized pasture walking through the waist-high native grasses trying to find the large chocolate fallow that they knew was there. The concept seemed simple…follow his rutting calls until he is located. But, the buck kept moving on the trail of the does; and that meant that Lance and Emily had to keep changing direction. Finally, they were able to spot him and move in for a shot. But it still was not simple; the grass was so tall in places that Emily did not have a clear view of the fallow much less a clear shot. Right before losing shooting light, the huge chocolate fallow buck made a mistake. Distracted by the does, he did not show the same awareness of his surroundings that had allowed him to evade other hunters the past year and a half. He followed the doe out into the open and stopped. That was all that Emily needed…a clear opening for a shot. Emily really had to work long and hard to take the beautiful chocolate fallow buck, but she would not want it any other way.
We invite you to visit the Patio Ranch and experience your own unique hunting adventure. Like Emily, spend a day or two hunting for some of the very elusive trophies on the ranch so that you too can reminisce and “…tell a different hunting story!”
Congratulations to Emily! Good hunting! 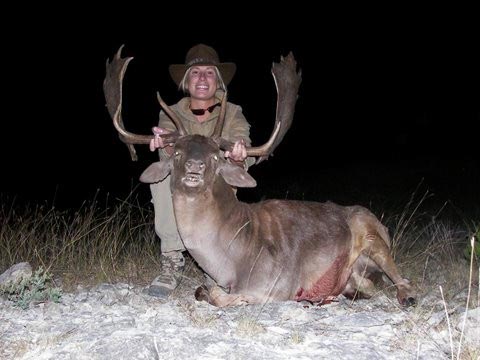