Jeff’s busy life with work and preparation for his second child had lately left less time for his hunting opportunities. But a one day window of time presented itself to Jeff suddenly. So he called his best hunting buddy (who also happens to be his father, Larry) and they were off for another visit to the Patio Ranch.
The weather was really great for hunting…cool but not cold, clear, a little wind. And the red deer that Jeff was hoping to find had been very active. The day started with spotting a number of bulls in the pasture. A couple of stalks that brought us close enough to get a good shot were fun, but the one bull that we were seeking was not among the bulls seen. We started adding up the red deer spotted and determined that we had seen 6 of the eight bulls in the pasture.
Another stalk on some large bodies that we had spotted brought us up on two red deer bulls feeding at 40 yards that had no clue that we were in the area. About the time we determined that neither was our target bull, a very large blackbuck antelope and some does walked up on us at 20 yards. Because of the size of the antelope, Jeff really considered switching his target. But the blackbuck doe spotted us and that made the decision for him…back to the red deer.
Evening fell and we were down to our last 10 minutes for making good shots before complete darkness enveloped us. All of the sudden, Jeff saw a movement in the dim light ahead of us. We both knew that was him. A quick stalk to close the distance caught the eye of the bull and he stopped to determine if we were a threat. That was all of the window that Jeff needed to take a shot with his hunting sticks for support. Jeff’s aim was true and the tremendous bull dropped to the ground. The picture tells the rest of the story.
We invite you to give us a call if you, like Jeff, have an opportunity to leave the everyday world behind for a day or two. The many hunting opportunities on the Patio Ranch are here for those that would like to have an adventure similar to that one in this story. Jeff’s perseverance and willingness to work hard payed dividends for him. The days long stalks that brought him close to many different animals were thrilling and gave him plenty of material to again, “…tell a different hunting story!”
Best wishes for a blessed Christmas! 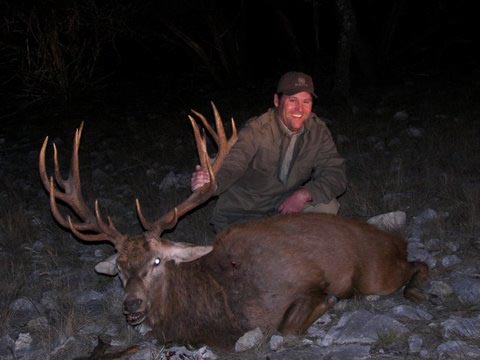