Karim had set up his hunt in January of this year. He was eager to add some exotic game meat to the fine dining fare at his home in Austin. The species was not determined at that time, but a number of possibilities had been discussed. We had talked a couple of times prior to the hunt and Karim seemed eager to start his exotic hunting experience.
Karim left very early on Friday morning only to have his trip length extended by the ever increasing tangle of Austin traffic. When he arrived at the Patio Ranch, he seemed to sigh in relief to be away from the hustle and bustle that is a life in a large city. After a few deep breaths of the great country air here on the ranch and the taking in the calming effect of the peaceful surroundings, Karim was ready to test fire his rifle. After a slight adjustment to the scope and a couple of warm-up shots, the rifle was loaded for the hunt.
The quarry that had been selected for Karim today was a young barasingha bull that had somehow been injured in interactions with other deer during the winter. He had healed and was healthy, but his antler growth would be forever changed by this injury. It was decided that this would satisfy Karim’s intent of great table fare as well as a fun hunt. After two hours and many trips up and down hills, in and out of draws, over rocks and around trees, the young bull was finally in a place where Karim could make the shot. Wes and Karim were careful to make this shot count as the heat of the day was starting to bear down on them. The picture indicates the result…a lot of healthy venison for the table and a hunt to remember.
We ask you to join us in congratulating Karim on the success of his hunt…his goal of a fun hunt along with a large store of meat for his freezer. As Karim has shown, the reasons that people hunt are as varied as the hunters themselves. The Patio Ranch prides itself on providing a hunting experience that will fulfill the wishes and dreams of most hunters. Come join us and, like Karim, have fun and then be able to “…tell a different hunting story!”
Best wishes for a great summer! 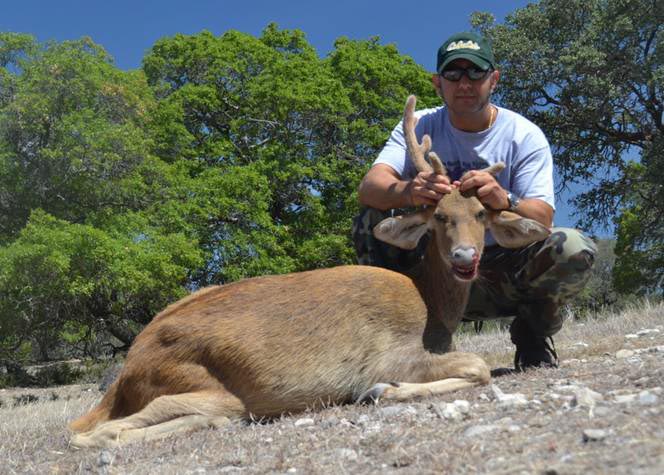